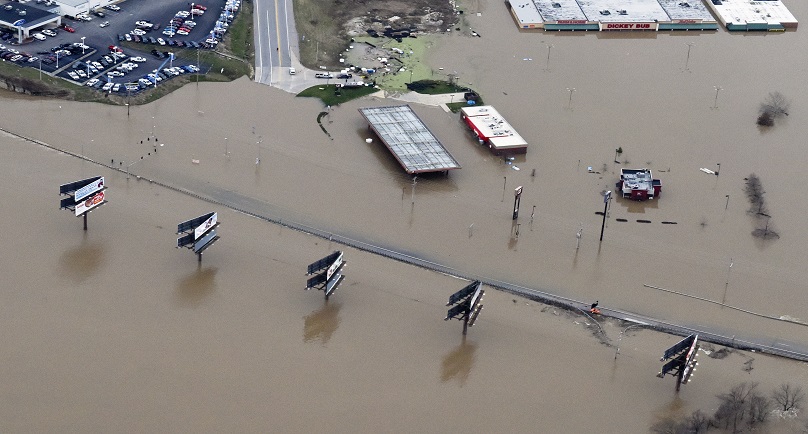 Image: Submerged roads and houses are seen after several days of heavy rain led to flooding, in an aerial view over Union, Missouri December 29, 2015. REUTERS/Kate Munsch

(Reuters) – Residents of flooded areas in far southern Illinois anxiously waited for the swollen Mississippi River to peak on Sunday, with hundreds electing to remain in their homes, as states downstream prepared for the rising waters.

About 125 structures were flooded in hard-hit Alexander County, the southernmost point in Illinois, where three families near one breach stayed dry behind sandbag fortifications and private levees, county board Chairman Chalen Tatum said.

The National Weather Service on Sunday canceled a flash flood watch for Alexander and two other Illinois counties, where record or near-record river levels have threatened levees.

Days of downpours totaling 10 inches or more in spots pushed the Mississippi and smaller rivers over their banks in several states. At least 31 people have died in Missouri, Illinois, Oklahoma and Arkansas, most of them after vehicles drove into flooded areas.

Nine people have died in the Illinois flooding and a dozen counties have been declared disaster areas there, said Patti Thompson, spokeswoman for the Illinois Emergency Management Agency.

In Alexander County, officials knocked on more than 500 doors to urge people to leave voluntarily, though many stayed, Tatum said. The voluntary evacuation could run another four days and no injuries or deaths have been reported, he said.

“The levees have a lot of pressure on them,” Tatum said, adding that a breach two days ago in a levee west of Miller City in the county has reached a quarter-mile wide. “We hope they hold, but I don’t want to bet someone’s life on it.”

Tatum said many more homes were affected by a flood in 2011 and expressed frustration that already approved buy-outs of more than 100 homes and small businesses related to that flooding have been stalled by an Illinois state budget impasse.

The Mississippi receded further from dangerous levels at St. Louis and farther south at Thebes, Illinois, and Cape Girardeau, Missouri, on Sunday, the NWS said.

Significant flooding was expected into mid-January along the Mississippi River at points downstream, from Tennessee to Mississippi, Arkansas and Louisiana.

“I hope it’s going to slow down,” said Kristy Morgan, an assistant manager of Little General Marathon Gas in Tiptonville, a small city in the northwest corner of Tennessee.

“All I know is they have been working around the clock doing sand-bagging,” Morgan said of city and county personnel and emergency agencies in the area.

The river is expected to crest at the moderate flood stage on Thursday in Memphis, Tennessee, according to the NWS. In Louisiana, where crests at some points along the river are not expected until mid-January, officials are checking levees daily.

Exxon Mobil Corp said its 340,000 barrel-per-day refined products terminal in Memphis remained closed. On Friday the company decided to shut the terminal, just south of downtown, as flood waters threatened to inundate it.

(Reporting by David Bailey in Minneapolis, Erwin Seba in Houston and Tim Ghianni in Nashville; Editing by Dan Grebler)