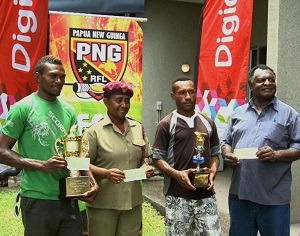 The Southern 9s Competition began last weekend, with the Port Moresby South Taudia’s winning the first leg of the tournament.

Team captain and coach of Moresby South, were presented with a five thousand kina check and trophy by the Games Organising Committee.

With the competition underway, the second leg will feature the Highlands region, then to Lae for the third leg. The final leg of the competition will be staged at Kimbe, in the New Guinea Islands Region.

The aim of the tournament is to identify potential talent from each region.

There are four leagues, one in each region and twenty four teams in the competition including a Queensland based team, the Kokomo’s.

The top two finalists from each of the respective pools, will be invited to compete at the National 9’s tournament in Lae.