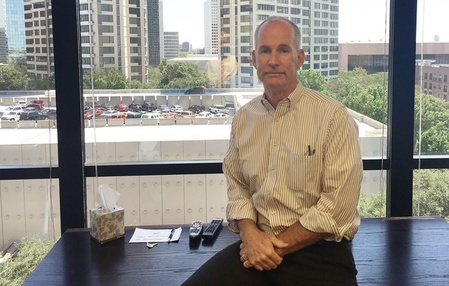 HOUSTON (Reuters) – The rows of traders who line the massive trading floor at Mercuria Energy Group’s Houston headquarters rely on a string of modern conveniences to execute deals across the globe. But when they’re under the gun to deliver oil fast, they call one person: Tim Holan.

That’s because Holan, the head of logistics for the trading firm, cut his teeth on moving an even heavier cargo: elephants.

They, along with lions, clowns and other performers were part of the mile-long moving city that Holan spent nearly two decades shuttling around the country as logistics manager for the Ringling Bros and Barnum & Bailey Circus.

Unruly animals, however well-trained, have a way of making the shipping of thousands of barrels of crude oil every day seem a bit less hectic.

“Crude oil is easier,” Holan said. “There is a specific infrastructure built for oil with the idea that there would be repeat business. With the circus, there’s always one-off moves and unpredictability.”

Holan’s own journey, which includes stints removing radioactive dirt from nuclear facilities and coordinating helicopters for airlifts after Hurricane Katrina, began in 1977, when at the age of 14 he ran away from his Pittsburgh-area home.

He got a job sweeping out the trains at Ringling Bros in California, lying about his age on his application to secure work.

“It was a different era,” said Holan, who is now 53. “Everyone knew I lied about my age, and that would never happen now. Looking at it now, I mean, what was I thinking, but at 14 it just seemed like a big adventure.”

Holan’s father, Rich, who once worked in the administration of U.S. President Ronald Reagan, said it was painful to see his son run away from home.

“It was a bad thing, but it all worked out,” he said in a phone interview. “He made some bad decisions at a young age, and he made some great ones.”

‘A MODEL OF EFFICIENCY’

Ringling Bros is considered the world’s largest private train operator, running two separate trains of 60 rail cars, each stretching more than a mile. Holan thrived in the circus’s apprentice-style culture, working his way up to trainmaster and then general manager, where he was put in charge of coordinating the journeys. He never missed a show during his time there.

During long hauls, such as trips from Dallas to Philadelphia, Holan would have to stop the train to make sure the animals were fed and bathed.

“Whether it was a field in Iowa or a parking lot in Chattanooga, Tennessee, we had to find a spot to unload all the animals from the train,” Holan said. “The train operators would often know in advance where we were going, and they would bring their families to get a glimpse of the show.”

New York was the most challenging destination, as Holan had to park the cars in Queens, with a short window in the middle of the night to parade the animals through the Queens Midtown Tunnel on the way to Madison Square Garden.

“It was always funny to watch the face of someone who walked out of a club in the morning to see an elephant walking the streets,” Holan said.

For much of his career with the circus, Holan’s secret weapon for dealing with the unexpected was a roll of quarters. In the case of a snag on the rails, Holan would scramble to locate a pay phone to contact his roster of contacts when problems arose, using the information gained to chart a different route.

After shows, the equipment had be to meticulously reloaded into the cars, with little margin of error and under deadlines laid out a year in advance.

“Everything was measured within a half inch so it would fit in the cars. The circus is a model of efficiency,” Holan said.

The biggest challenge he has faced during his days at the Swiss trading giant was during the oil rail boom during 2014 and early 2015, when space on rails was scarce. He said rail profit margins are slim, and delays can quickly put a trade in the red.

“The rail operators put too many cars on the lines. That was the problem. They could have moved more volumes, with less cars because speeds would have been higher,” Holan said.

How did he navigate this stretch? By way of his contacts on the rails during his time in the circus, which gave him insight into alternative routes and a network of sources who could provide unique details about unexpected problems. The quarters are gone, though; Holan relies on email and text messages to uncover problems.

Crude rail volumes have dropped significantly in the past year as the economics have favored waterborne imports, leaving a trail of unused tank cars and plenty of uncertainty about the future of the business.

“I think it’s probably fair to say that crude by rail has hit its high-water mark, but I don’t think its gone forever,” Holan said. The power of rail, he added, is that it can quickly be called back into action when market conditions change, for example during supply disruptions.

That kind of juggling suits a guy who spent his years keeping balls in the air to get circus clowns to their shows on time. Unlike the circus, which only had the train, oil at least has the option of pipeline, rail, ship or truck.

“For a logistics guy, options are a best friend,” he said.