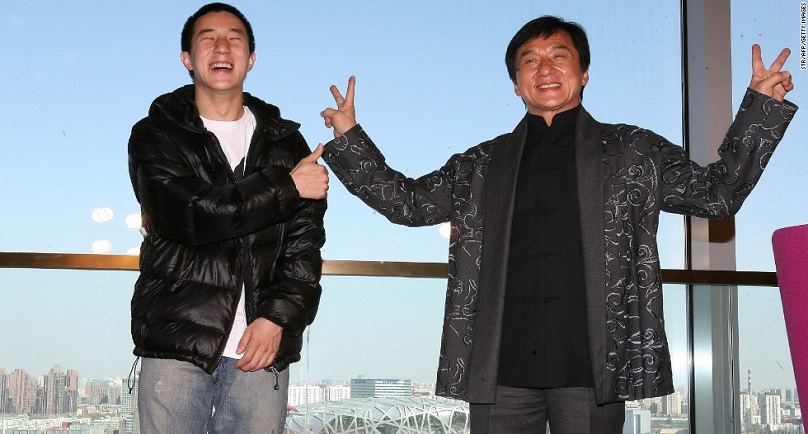 Jaycee Chan, the 32-year-old son of kung fu movie star, Jackie Chan, has been sentenced to prison for six months for drug charges.

The younger Chan, also an actor, was arrested in August, 2014, along with Taiwanese actor, Kai Koi, 23, during Beijing’s clamp down on celebrity drug offenders. The two were arrested in Beijing’s commercial and cultural centre, Dongcheng district.

Both had tested positive to marijuana and following the arrest, a search on Chan’s apartment resulted in authorities retrieving more than 100 grams of the drug.

The case has brought attention to Beijing’s intensified anti-drugs campaign where it’s been reported that nearly 10, 000 people have been lawfully detained for drug use.

The Chinese government has issued a zero tolerance warning to celebrity offenders. They say, this is because of the impact and influence that celebrities, like Jaycee Chan, have on the youth.

A notable absence from the court room on Friday, 9 January, during the handing down of charges against Jaycee, was that of his father. The kung fu movie star has strongly condemned the actions of his son.

In media interviews, Jackie has expressed great disappointment and anger towards his son’s drug use and arrest. The older Chan was named ‘Anti-drugs Ambassador’ in China in 2009.

“I failed to discipline him — now the state is helping me discipline him and make him get rid all the bad habits,” the elder Chan, 60, told the state-run Xinhua news agency in December, 2014.  Chan went onto deny allegations of his son receiving special treatment in jail.

Local Beijing media reported that Jaycee appeared remorseful for his actions which led to his arrest, and conviction. He pleaded guilty to “hosting others to take drugs” and fined 2, 000 yuan.

According to the Dongcheng District People’s Court, Chan’s cooperation with the police during investigations, was the basis for leniency.

“I committed a crime and deserve to be punished,” the court’s official microblog quoted him as saying. “It doesn’t mean I have received mercy and forgiveness — I hope to earn them with my future actions,” said Jaycee Chan.

In August 2014, management agencies that represent singers, actors and actresses, signed agreements with authorities in Beijing, to ban the use of drugs in the entertainment industry. They also pledged to ‘fire” celebrities who broke the law.