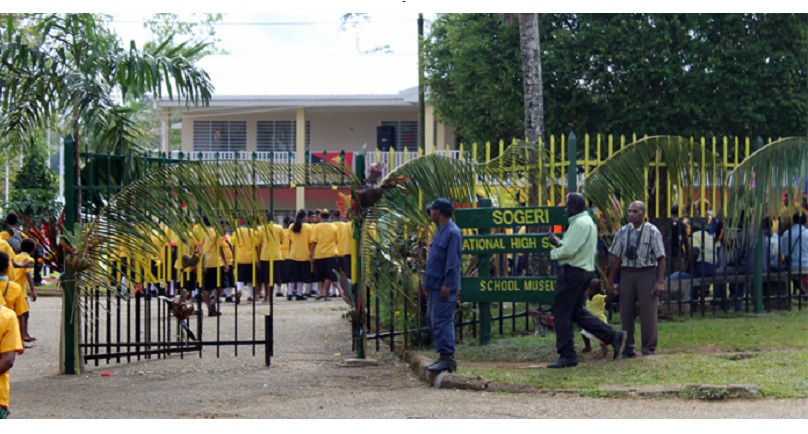 As the academic year is approaching, Sogeri National High School in the Kairuku Hiri Electorate of Central Province is undergoing a major facelift through its infrastructure development.

This phase of work saw the renovation of the school’s administration block, and the erection of several new buildings.

While this rehabilitation project is underway, the school is lacking adequate water supply and resource materials for the students.

Since 2010 former Principle Benny Rayappan through his stewardship, has delivered successful projects in the school.

“Over the years, they have been using limited supply of textbooks for learning. They have also used untreated water from the nearby Iarowari River for washing.

“However, tanks are limited for use,” he said.

To date, they have been using only two tanks to collect rain water for cooking and drinking.

With rundown messing facilities senior teacher Peter Huafe said rats often spoil the rations through the holes in the buildings.

Limited spacing causes students to overcrowd in dining tables. That is eight students to a table.

Firewood is predicament in the area due to its scarcity. Huafe said students find it difficult to collect firewood because of vast savanna vegetation.

Inadequate water supply is also posing health risks for the students. Meanwhile, there is high probability of obtaining contagious diseases like typhoid, cholera and dysentery from this untreated water.

However, with more plans for this school’s development, the K10 million kina funded by the National Government will be used to carry out major rehabilitation works.

Pantreid Construction Ltd has been carrying out major renovation and construction works on the male toilets, dormitories, and the school’s canteen and car park.

Concurrently this money is used for the school’s rehabilitation project. This year the school is expecting an increase of 600 student intake.

Deputy Principle Academic Kive Kererembo said this project is believed to be completed before the school begins by February 6th.