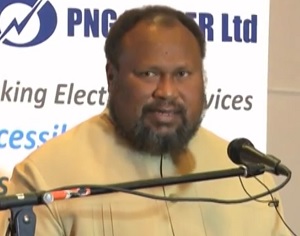 The government has announced a state of emergency for electricity services in the country.

The state of emergency will be for two months and within this time, police and military will be used when necessary to assist PNG Power workers conduct their duties of assessing illegal power connections and non-payment of electricity bills.

Illegal power producers and users have been given 48 hours’ notice to report to PNG Power. Those that fail to do so will have their power disconnected and those generating, supplying and using illegal power arrested and charged.

At a high-profile media conference today in Port Moresby, the Minister for Public Enterprise and State Investments, Ben Micah, announced the Government’s State of Emergency for electricity services, under the Essential Services Act of 2002.

Under the Act, the declared emergency allows Mr Micah to assume all powers in relation to electricity services and power regulation and related services throughout the country from the PNG Power Board and Management, IPBC and the NEC as per the National Gazettal dated 22 December 2014.

The government has allocated K4 milllion towards the emergency exercise. Mr Micah warned illegal power suppliers and users that they have just 48 hours from 8am tomorrow, to stop their illegal actions and report to the nearest PNG Power office.

Using the emergency powers, Mr Micah has, amongst other things, halted all travel and expenditure by PNG Power until approved by him, and that all Independent Power Provider arrangements be halted.

PNG Power is currently having serious negative cash flow issues due to a lack of terrify increase. PNG Power CEO, John Tangit, said the company has a debt of K130million.

The former Chief of Staff of the PNG Defence Force Captain Tom Ur has been appointed as the Emergency Controller.

The advisory committee has been instructed to look into appropriate measures for the payment of electricity bills and collection of outstanding bills from Government departments, SOE’s, government agencies, private companies and individual consumers.