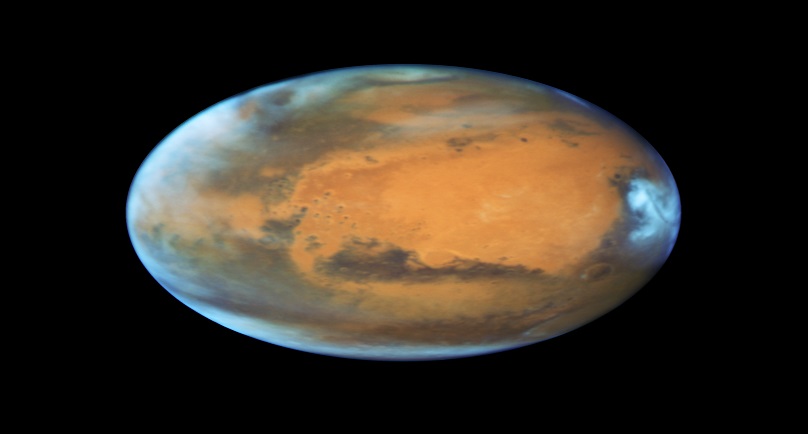 Image: The planet Mars is shown May 12, 2016 in this NASA Hubble Space Telescope view taken May 12, 2016 when it was 50 million miles from Earth. Earth’s neighbor planet makes its closest approach in a decade this month, providing sky-watchers with a celestial show from dusk to dawn. NASA/Handout via Reuters

CAPE CANAVERAL, Fla. (Reuters) – Mars makes its closest approach to Earth in a decade this month, providing sky-watchers with a celestial show from dusk to dawn starting this week, NASA said on Thursday.

The red planet already looms large in the nighttime skies, appearing as a bright, fire-yellow, star-like light as a result of Earth, the third planet from the sun, and Mars, the fourth, coming into close alignment.

“Just look southeast after the end of twilight, and you can’t miss it,” Sky & Telescope magazine editor Alan MacRobert said in a statement.

This alignment occurs about every 26 months.

On Thursday, the U.S. National Aeronautics and Space Administration (NASA) released a photograph of Mars taken by the Hubble Space Telescope as the planet neared Earth last week. The detailed image showed polar caps and clouds above Mars’ rust-hued landscape.

On May 30, Mars and Earth will come closer than they have been in a decade, NASA said. Mars will be 46.8 million miles away.

The distance between Earth and Mars reaches up to about 250 million miles depending on the ever-changing positions of the two planets as they circle around the sun.

If skies are clear, Mars will be visible for much of the night and can be easily seen without a telescope or binoculars.

Mars has been even closer to Earth before. In August 2003, Earth and Mars were just 35 million miles (56 million km) apart, a quirk stemming from the planets’ slightly oval-shaped orbits around the sun.

It will be almost 300 years before the planets come that close again.

Bodies of 21 women, one man found on migrant boat in Mediterranean – MSF