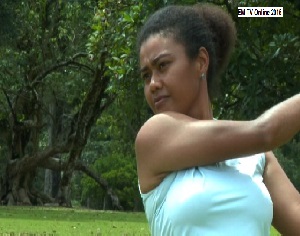 Little is known about Papua New Guinea’s family of golfers; there’s father Joseph Maras, and daughter Shavina. Joseph has been an integral part of the development of golf in PNG, and now, his 21 year old daughter, Shavina is one of PNG’s best female golfers.

She started playing at the tender age of 4, and won her first match at the age of 6, in the Liklik Gold tournament in Lae, in 1999. She has also represented PNG abroad, and is now ready to do it on home soil, in July.

Lorraine Genia caught up with Shavina and her family in Lae, recently.

For the Maras family, golf has been a lifestyle.

Joseph Maras, knew by the time his daughter was 6, that she was destined to be a golfer.

Shavina, began playing junior golf at 4, and at the age of 6, started playing, competitively. The young lass has yet to become pro, but already, has achieved several milestones in her life.

Shavina won gold for Morobe, at the 2009 PNG Games, and last year again, at the 6th PNG Games. Apart from that, she has represented Papua New Guinea at the Arafura Games, and the 2011 South Pacific Games, in New Caledonia.

Balancing her education with golf has always been a challenge.

In 2013, she stopped playing golf entirely, to focus on her first year, at Unitech in Lae.

With exceptions made to her education, due to the 2015 Pacific Games, Shavina has now shifted all her focus on the lead up to the Games.

Calls to Control Production, Sale and Consumption of Alcoholic Beverages