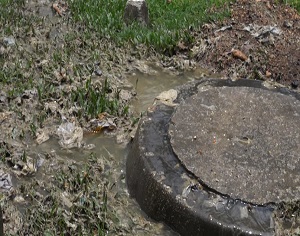 Residents of 5 houses at the Waigani Police Barracks, commonly known as the Games Village are crying foul, as waste from their sewage systems overflows in the area.

The stench is unbearable and residents say their plea for help has fallen on deaf ears.

They have faced health and hygiene problems for 15 years now and want authorities to do something about it.

Andrew Baitas, a resident there, said the grinder pump responsible for breaking down solid waste has been dysfunctional since 1995.

This has led directly to the over flow of solid wastes material.

Residents are fed up of cleaning up the mess and have reportedly fallen ill in the process.

Although they have reported their complaints to water and health authorities nothing practical has been done in terms of maintenance.

Residents complained that the sewage systems were analysed and reports were filed repeatedly but to no avail.

They say the common response was that there weren’t funds available to conduct routine maintenance.

Attempts to get a response from Eda Ranu were unsuccessful and they are yet to reply emails sent.

Polling to Go On for Nabak LLG