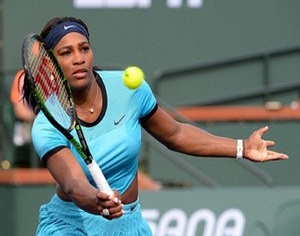 (Reuters) – Top seed Serena Williams turned an early challenge into an eventual cakewalk as she beat Russian-born Yulia Putintseva 7-6(2) 6-0 in the third round of the BNP Paribas Open in California on Sunday.

As boxing great Mike Tyson watched on, Williams punched below her weight in the first set, during which she made 29 unforced errors and had to break Putinsteva’s service to force a tiebreak.

The second set was not a fair fight, with business as usual resumed as Williams overwhelmed her opponent. “I started to get more confidence to continue to go for it,” Williams told reporters, referring to her strong finish.

The 34-year-old American ended with seven aces and moved closer to her first title at Indian Wells since her infamous win in 2001, after which she boycotted the event until finally returning last year.

Serena was booed throughout the 2001 final by a crowd that assigned her the blame for the withdrawal by her sister Venus before their scheduled semi-final.

While Williams got a good workout on Sunday, world number three Agnieszka Radwanska of Poland barely raised a sweat as she continued her bid for a first Indian Wells crown by beating Monica Niculescu 6-2 6-1.

Radwanska reached the final in 2014, when she lost to Italy’s Flavia Pennetta, a result she uses as motivation. “I really want to have (this) trophy at my home,” Radwanska told reporters. “This is one of the biggest tournaments (on tour). So this is another year to try.”

On the men’s side, Kei Nishikori cruised past Mikhail Kukushkin 6-3 6-3. The Japanese player needed just 70 minutes as he converted four of his five break points and improved his record at a tournament that has not been kind to him.

“I’ve never done well in Indian Wells but I’m becoming better feeling, so should be good this year,” he said. “I’m not the biggest server on the tour, so I try to mix it up, try not to panic, stay relaxed and focussed.”

(Writing by Jahmal Corner in Los Angeles; Editing by Andrew Both)