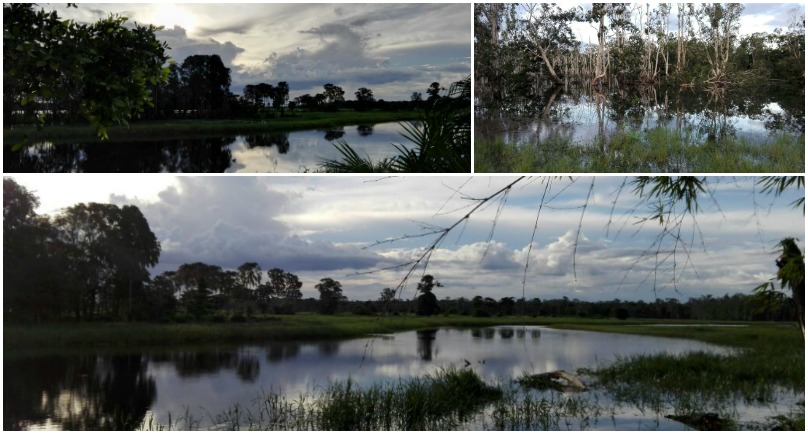 I woke up to the sounds of birds this morning. Peering through the curtains, the view leaves me disoriented. The soft morning light touches the trees standing tall in the middle of a mass of water. Have I woken up on the banks of the Mississipi? Like a scene out of a Hollywood movie, my only reference to such a scene until now.

I am at Bensbach Lodge, Morehead area, Western Province, Papua New Guinea. I left my home in Port Moresby yesterday in the morning as a privileged member of an inter-government agency border team. An hour and a half later on Air Niugini we are in Daru, the Western province provincial capital.

By the look of the road conditions from the airport, it needs much more government attention. Another hours ride by helicopter over a vast expanse of savannah vegetation, the team makes it to Bensbach Lodge situated within the Tondo Wildlife Management Area.

Here we meet and prepare to camp for the night, amidst the sounds of wetland wildlife. It’s easy to be serenaded by the sounds and beauty of the landscape, to picture what Eden must be like. The helicopter ride allows me a view of the logistical nightmare of living in this part of paradise.

A quick chat with local women reveals that the only community school here, which has Grades Three to Six, has not opened yet due to the drought. The school is managed by just one teacher, and there are talks of it opening again in term two.

The closest government station is at Morehead, which is where the high school is. As in the biblical paradise, danger lurks here. From wild reptiles such as poisonous snakes and crocodiles, to the guns of poachers. By 5pm on the first day here, members of the surrounding villages, men, women and children came to the lodge to meet the delegation.

It’s been a long time since a government delegation of this number visited the area. Their main concern is the lack of government attention. Not only to the wildlife management area, more so to them as people, of their security and well being.

As night looms the community members leave with the assurance that they have been heard. Right now at Bensbach it’s midday, the occasional bird calls but mostly it’s the sounds of insects that buzz.

Another day in a paradise that seems forgotten by the rest of PNG.