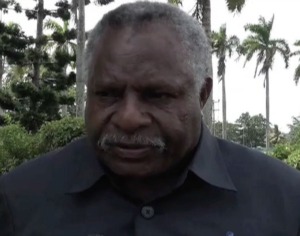 The Police department is now working to reintroduce a sea policy following increasing reports of piracy incidences in coastal waters.

In many provinces, boats bought 20 years ago for police are not working anymore.

Police Minister, Robert Aitiyafa, has already sent a delegation team to Korea to study how water policing units can be set up in the country.

The Police Minister said a review on sea piracy is underway and will be discussed further in the next commissioner’s summit, with the provincial police commanders and the ACPs.

A border command was established to look into matters within the border provinces. The command looks after issues like transmigration and illegal border crossing. And sea piracy will also be looked into during this summit.

Sea Piracy is a relatively big problem in the coastal waters of Morobe and also in the other parts of the country.

In 2015 alone, there were 5 separate reports of boats being robbed in Morobe waters. But, police are not able to prevent these armed robberies that happen out at sea.

The planned units will be responsible for marine policing and will take charge of sea piracy matters.

Brian Jack has been a skipper for almost 8 years. He runs his own boat service from Lae to Finschaffen. Jack was a victim of sea piracy.

He had a 40 engine outboard motor. But, it was stolen with the other valuables when he was robbed.

Assistant Commissioner of Police for Northern Region, Peter Guiness, said water policing is a priority he wants to capture in his command.

He hopes the modernisation program in the RPNGC will also address water policing need.

There have also been two separate incidents in Lae City where criminals have used boats to escape.

And then again a fast food outlet was robbed. Police were alerted and gave chase. But the suspects escaped on boat.

“Yes, criminals have been escaping on boats,” said Wagambie.

Meanwhile, the Morobe Provincial Government is trying to manage sea piracy in the Morobe waters. But, it needs the full cooperation of all stakeholders.

Morobe Governor, Kelly Naru, said they are willing to work with the police to address the matter.

However, the provincial government still doesn’t have a strategy to deal with increasing reports of sea piracy.

Naru says the government will need to have in place permanent programs. And police patrol boats is one solution.

The provincial Government will need to work with the police so that a water policing unit can be created.