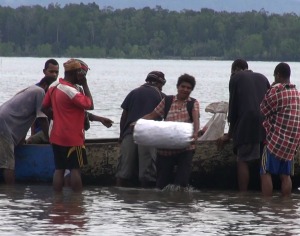 A rise in what many refer to as sea piracy cases has been reported along the west Motuan coast of Central province.

In other cases, local boat skippers aiding the transportation of betelnut bags were lost out at sea.

After the National Capital District Commission, through Governor Powes Parkop, effected the citywide ban on the sale and chewing of betelnut in the nation’s capital, people have resorted to the sea to transport and smuggle betelnut into Port Moresby.

This is evident along the Motuan west coast of Central province.

Motuan villages have experienced an influx of people who have brought alcohol, and marijuana, into the area that is the main cause of law and order problems in the community.

Youths in the area have engaged in criminal activities and conflicts erupt between families, clan members and villagers.

Councilor Raho said there were instances of sea piracy activities happening out at sea.

In the event of money being stolen at sea, travellers were assaulted and wounded while refusing to hand over cash and belongings to criminals.

In other cases, boat skippers aiding betelnut smugglers were lost out at sea.

Councilor Raho is warning people to take extra precaution of sea piracy while travelling out at sea.

He also warned youths in the area to refrain from engaging in sea piracy activities.