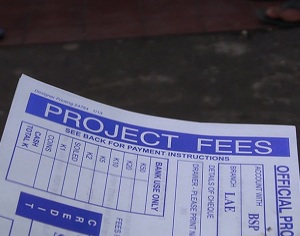 Some parents, in Lae, have complained about project fee payments imposed on them, by the primary and secondary schools their children are attending.

Many parents have made the effort of securing fees, and having the fees deposited into school bank accounts before the schools’ fee deadlines.

In the beginning of this year, the National Education Board agreed that no more project fees will be charged for the 2015 academic year.

However, since the first week of February, parents in Lae city have been registering their children in schools with the inclusion of project fee payments as required by most of the schools.

These parents have raised concerns on what the government will be doing now that many have paid their children’s project fees.

Runan Bruno, a father of a grade 6 and a grade 11 student from St. Pauls Primary School and Lae Secondary School respectively, was seen at the BSP bank in Lae, paying for his children’s project fees have them (children) registered.

“They charged us project fees. I have paid the fees for my children in secondary School. I still have to pay the fee for my other child’s fee in primary school,” Bruno said.

Meanwhile, the Huonville Primary School in Lae has also confirmed that it is part of the government’s free education policy, however it is still charging project fees on students.

Head teacher of Huonville Primary School, Barn Kawage stated that the project fees collected are meant to cater for other expenses not met by the government.

“The power has been decentralised to the provincial level so despite the national government, we go by the provincial education advisor saying that project fees must be paid until the government has given us enough money that can be refunded otherwise that will take us through from the start,” said Mr. Kawage.