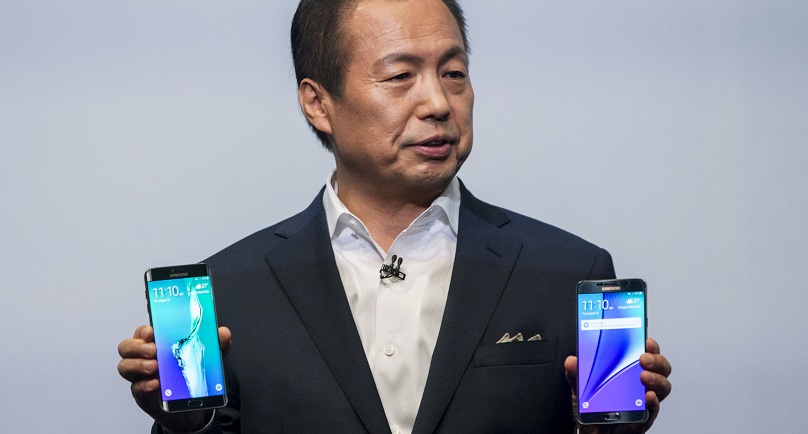 NEW YORK/SEOUL (Reuters) – Samsung Electronics Co Ltd unveiled a new Galaxy Note phablet and a larger version of its curved-screen S6 edge smartphone on Thursday, marking a fresh bid by the South Korean company to revive momentum in its handset business.
Samsung is the world’s top smartphone maker but its market share fell in the second quarter when the company released its critically acclaimed S6 models, squeezed by Apple Inc’s upscale iPhones and cheaper offerings from Chinese rivals such as Huawei Technologies Co Ltd.

The manufacturer responded with S6 price cuts and moving up the Note unveiling from its usual early September spot, ahead of the latest iPhone launch expected in September.

The event announcing the new gadgets was attended by more than 1,000 people, almost filling the Alice Tully Hall at the Lincoln Centre in New York.

Samsung has made several hardware changes for the new devices, including a faster processor for the Galaxy Note 5 and increasing the screen size of the S6 edge+ to 5.7 inches from 5.1 inches on the S6 edge.

Samsung has high hopes for the Note. “Each new version has been more popular than the last,” said Justin Denison, vice president of product strategy and marketing for Samsung Electronics America.

Both are powered by Samsung’s Exynos chips, the company said.

The phones will go on sale on Aug. 21 in the United States and Canada. They will be available on the four major carriers: AT&T, Verizon, T-Mobile and Sprint.

One expert said he was not sure how well the phones would help Samsung’s efforts in the competitive smartphone market.

The phones were not different enough, said Jonathan Roubini, editor-in-chief of Lab Reviews, “So that’s why it’s very hard for them to gain that market share from Apple.”

Roubini said that they may frustrate Android users. “The phone looks very cool, but you cannot change the battery, and you cannot add memory to it.”

Samsung also said its mobile payment service Samsung Pay will launch on Aug. 20 in South Korea and Sept. 28 in the United States.

The payments service will expand to the United Kingdom, Spain and China, the company said, without giving dates.