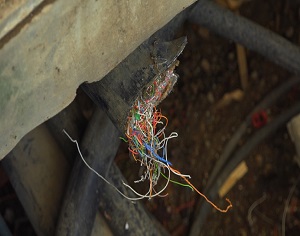 Prime Minister, Peter O’Neill, has warned people involved in the sabotage of telecommunication cables in Papua New Guinea, that they will be prosecuted.

Since 2014, there has been increase in vandalism of Telikom’s fiber optic lines or cables, in multiple areas of Port Moresby and Lae.

The recent incident happened last Tuesday, at Badili and Gordons industrial area, accounting for the worst damages ever.

The Prime Minister has warned those who encourage others to damage cables will also be prosecuted.

Mr O’Neill said some individuals are known and are believed to be facilitating the vandalism of telecommunication lines.

The extent of damages may take Telikom a week to restore these services.

However, Mr Wartovo said the restoration to the vandalized cables was progressing well.

Police Commissioner, Gari Baki, is tasked by Prime Minister, Peter O’Neill, to form an investigation team to look into the matter.