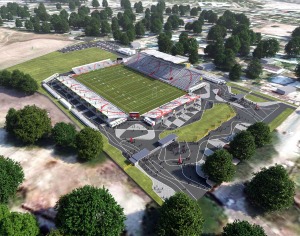 Construction work is continuing at what will become the home of rugby league in the capital, Port Moresby, at what will be known as the National Football Stadium.

Formerly known as Lloyd Robson Oval, the ground will be transformed from its former state to become a world-class facility.

The sport has been growing in popularity, and with the performance of the PNG Hunters, the construction of the National Football Stadium will elevate this status to previously unseen heights.

The stadium will be of National Rugby League standard, complying with the guidelines of the governing codes for football stadiums.

Once completed it will host local and international rugby league, rugby union, and soccer matches.

With these world-class facilities available, it will provide a more suitable pathway for competition in the county to evolve.

The National Football Stadium will also be used to cater for the upcoming FIFA Under 20 Women’s World Cup next year.