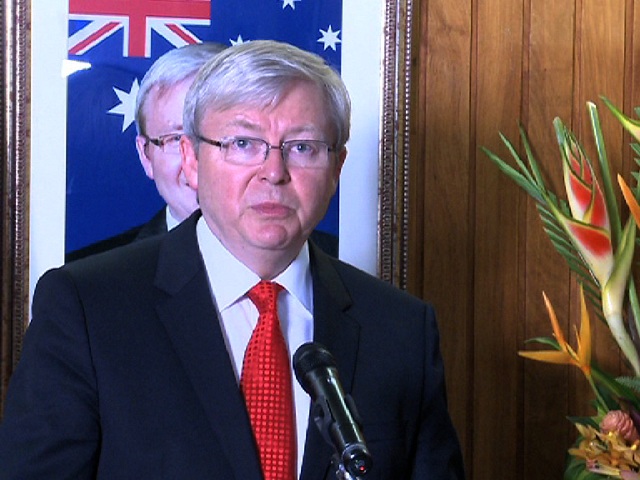 Australia intends to keep Manus as a permanent regional processing center of asylum seekers, and assist with our law and order situation in Papua New Guinea

These were announced bythe Australian Prime Minister Kevin Rudd who made a quick dash to Port Moresby on Sunday.

Mr Rudd was given a colorful welcome to parliament house. Awaiting him was Prime Minister Peter O’Neill.

A photo opportunity was given before a closed door meeting with government ministers.

Police work, correctional services and health programs were mentioned as areas of focus. They aim to aligntheir priorities.

He said his government is keen on tackling development challenges faced bPNG following through onthe declaration he signed in 2008.

He announcedthe funding ofthe design and scoping ofthe Ramu Madang highway and Improverments in immigration and processing lanes on arrival in Australia.

Bet his government is open minded to suggestions fromthPNG Government.

The Australian Government will provide just over $160 million over four years to 2016.

This additional funding will ensure continued availability of quality assured medical supplies for 2,700 health facilities across Papua New Guinea It will build on Australia’s existing support for pharmaceuticals procurement and distribution.