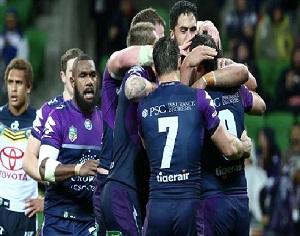 Round 25, the penultimate round of the NRL, saw the Roosters and Broncos finish atop the ladder with wins against the Rabbitohs and Sea Eagles, respectively. Brisbane thrashed an out-of-sorts Rabbitohs side, 47-12, while the Roosters accounted for Manly 46-10.

In other matches, competition dark horses the Cronulla Sharks moved into the top four with a come from behind 35-28 win over the Parramatta Eels. While the Bulldogs narrowly escaped with a win in their clash with cellar dwellers the Newcastle Knights in what was a hometown farewell for Knights captain, Kurt Gidley.

Following their shock loss last weekend against the Knights, the Melbourne Storm regrouped and defeated the North Queensland Cowboys. With this win the Strom will prepare to face the might of the Brisbane Broncos when they face off on Thursday Night in the last round before the finals.

The Wests Tigers, despite being well down the ladder easily accounted for a struggling New Zealand Warriors, while the Titans scraped home by two points against the St George Illawarra Dragons.