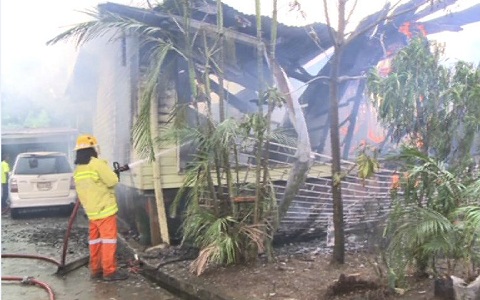 A resident on Port Moresby’s Angau Drive who witnessed his neighbour’s house burnt down last week has condemned the actions of how fire fighters responded to the emergency call he made.

The resident who wished to remain anonymous says the hotline he called was not answered after he attempted several times. He then called the Boroko Police Station and notified the police officer of the fire.

He added that upon arrival at the site, fire fighters wasted about 10 minutes to locate the water valve along the street as the 4 bed room house went down in ashes.

He called upon the Fire Service in PNG to revise its operation and equip fire fighters with appropriate emergency skills to combat fires and save lives and properties.

The resident says, the fire service has been very slow in responding to emergency calls throughout the country and this has caused millions of kina in damages for business houses, individuals and the general public.