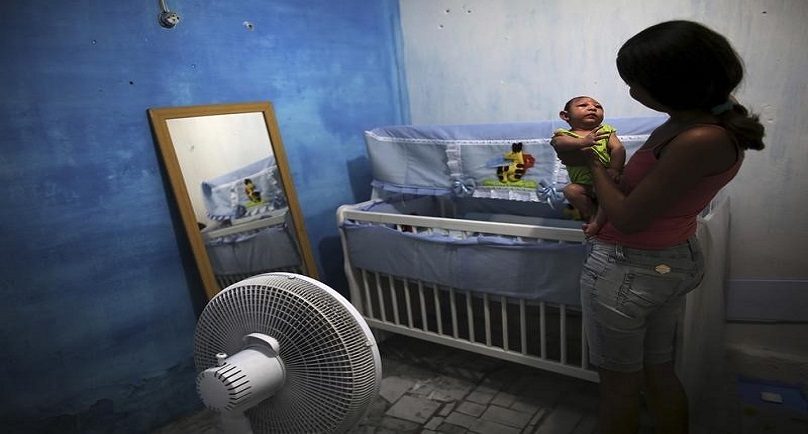 Image: Daniele Santos, 29, holds her son Juan Pedro who is 2-months old and born with microcephaly, at their house in Recife, Brazil, February 9, 2016. REUTERS/Nacho Doce

CHICAGO (Reuters) – Researchers on Wednesday reported new evidence strengthening the association between Zika virus and a spike in birth defects, citing the presence of the virus in the brain of an aborted fetus of a European woman who became pregnant while living in Brazil.

An autopsy of the fetus showed microcephaly or small head size, as well as severe brain injury and high levels of the Zika virus in fetal brain tissues, exceeding levels of the virus typically found in blood samples, researchers in Slovenia from the University Medical Center in Ljubljana reported in the New England Journal of Medicine.

The findings help “strengthen the biologic association” between Zika virus infection and microcephaly, researchers from the Harvard School of Public Health and Massachusetts General Hospital in Boston, wrote in an editorial that accompanied the paper.

Researchers in Brazil are scrambling to determine whether the arrival of the Zika virus in that country has caused a major rise in microcephaly, with more than 4,000 suspected cases of the condition reported to date.

Brazil has confirmed more than 400 of those cases as microcephaly, and identified the presence of Zika in 17 babies, but a link has yet to be proven.

The virus is transmitted by mosquitoes. There is no treatment or vaccine.

Professor Tatjana Avšic ?upanc, who led the researchers in Slovenia, said in an email her team’s findings “may present the most compelling evidence to date” that birth defects associated with Zika infection in pregnancy may be caused by replication of the virus in the brain.

For definitive proof, however, she said more studies are needed.

In the NEJM paper, the mother showed signs of Zika infection during her 13th week of pregnancy, but ultrasounds during her 14th and 20th week were normal.

It was not until the woman returned to Europe that researchers found ultrasound evidence of severe fetal abnormalities during an ultrasound in her 29th week.

That suggests that ultrasounds may pick up signs of severe fetal abnormalities “only very late in gestation – in many cases too late to terminate the pregnancy,” Drs. Eric Rubin, Michael Green and Lindsey Baden wrote in the editorial.

In the Slovenian case, the woman also noticed reduced fetal movement and was told the fetus had a poor prognosis. She requested an abortion, which was approved by state and hospital ethics boards and performed at 32 weeks gestation. A normal pregnancy lasts 40 weeks.

Aside from obvious microcephaly, the fetus showed no other deformities. The woman had no family history of genetic abnormalities that could have caused the microcephaly.

Researchers did an autopsy, and instead of normal grooves formed in the brain during growth, the surface of the brain was smooth and there were numerous calcifications, which are suggestive of inflammation.

Brain samples tested positive for the Zika virus, and no other viruses in the same class, such as dengue, yellow fever or West Nile virus. The doctors also ruled out many other potential infectious causes of microcephaly, including rubella, cytomegalovirus and toxoplasmosis.

Importantly, the team found no presence of the virus and no other defects in any fetal organs other than the brain, which suggests the virus selectively attacks nerve tissue, Avšic ?upanc and colleagues wrote. But exactly how the virus does this is not clear.

The discovery of viral particles and a high load of Zika virus RNA in the brain samples, coupled with the absence of other possible pathogens, and a complete viral genome present “strong evidence” of the Zika virus’ potential for causing birth defects, Avšic ?upanc said in an email.

In January, a team of researchers at the U.S. Centers for Disease Control and Prevention reported that they, too, found evidence of Zika virus in brain samples from Brazil taken from two miscarriages and two newborns who died shortly after birth.

CDC published full results of their findings earlier on Wednesday.

Tertiary Experiences You Can Learn From