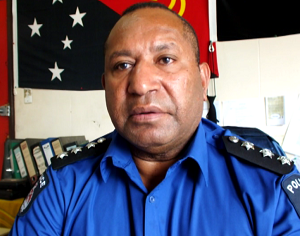 Enga Provincial Police Commander George Kakas has called on all partners involved in the Porgera Call Out Operations to replace the current Joint  Security Forces.

PPC Kakas says although the Joint Forces have managed to reduce crime mostly related to illegal mining activities, the allegations of their brutal approach to the community outweighs the good.

He has offered that the Joint Forces comprising police and Defence personnel, be replaced with the Community Policing concept.

The provincial police boss says in the last three years, there has been three call outs, costing the government over K30 million. While he appreciates the Joint Forces work to maintain peace in Porgera, he was concerned at their approach to civilians.  He has seen the good and the bad sides of the Joint Forces,

PPC Kakas says, the Community Policing Concept will make communities be responsible to maintain law & order. But he says, the Joint Security Forces in the Call Out can be deployed if and when the situation gets out of control.

Since the first call was made in April of 2014, crime rates have dropped at Porgera Valley, mostly related to illegal mining activities. Barrick Gold, the developer of Porgera Gold Mine is a major cooperate partner in the Call Out Operation due to increase illegal miners and rise in criminal activities in the Porgera Valley.

Some of the success of the Joint Security Forces Contingent Team headed by Commander Norman Kambo include the successful negociations between relatives of a deceased female employee and workers of IPI Mountain Transport Limited. Relatives of the deceased held two IPI fuel tankers on ransom, and demanded K2.5 million compensation.

However, through the Joint Forces intervention, they negotiated for the release of the two trucks and ordered all parties including Barrick Gold to meet and solve this issue once and for all.

What are Papua New Guineans looking at on the Internet?