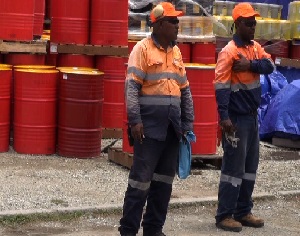 The clearance to the five days old roadblock at Hanuabada village, outside Port Moresby, has come at a critical time, as the sole jet fuel distributer in Port Moresby is running low in fuel supply.

The jet fuel distributer, Pacific Energy Aviation, today confirmed that they have been operating with limited supply since the road was blocked off last Friday.

Pacific Energy Aviation is the only supplier that distributes jet fuel to Air Niugini and other domestic and international airliners, including helicopter companies. Airlines PNG is the only airline that sources its fuel from a different distributor.

Pacific Energy Aviation normal distribution capacity is 250,000 litres a day. However, it has been operating below average since the Hanuabada incident. This morning it distributed only 70,000 litres.

The company’s procurement and analyst officer, Alphonse Aaron, says they are managing little supply they have to make sure Air Niugini’s planes departing Jacksons Airport are refueled. He said other airliners are also considered.

But the issue is likely to return to normal after Hanuabada villagers agreed to remove the road block today and allow traffic to continue.

Meanwhile, PNG Power Corporate Relations has advised NCD residents that load shedding will continue until tomorrow. This is because fuel supply has yet to reach the Kanudi and Moitaka power stations.