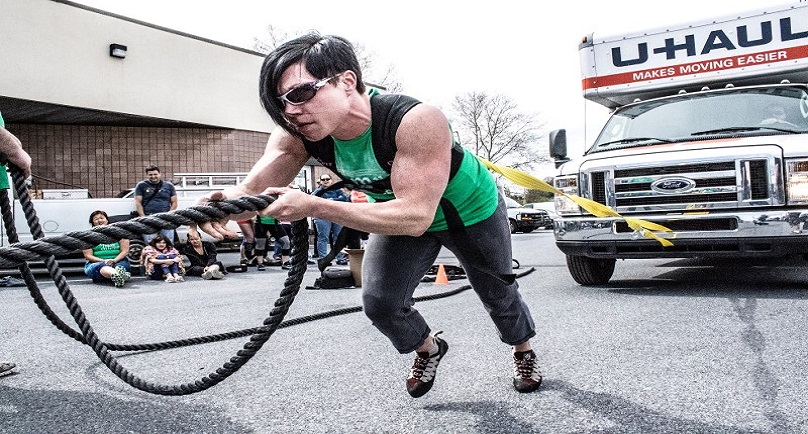 Image: A participant in the May Queen Spring Strongwoman competition pulls a truck in Lancaster, Pennsylvania April 25, 2015. Courtesy of Amanda Kulik/Handout via REUTERS

NORWALK, Conn. (Reuters) – Still shunning alcohol because she was breastfeeding her 7-week-old baby, Jessica Hopkins grabbed a 50-pound (23 kg) beer keg with her bare hands and hurled it over a chest-high metal bar.

Women like Hopkins, a former jewelry design assistant, are the fastest-growing group of competitors in Strongman, a sport that involves chucking, dragging and hefting tremendously heavy weights. Events include single-handedly pulling a 23-ton (21-metric-ton) fire truck across a parking lot or heaving a 200-pound fire hydrant onto a shoulder-high platform.

“It’s almost like labor – you have to work through it even though it’s hard,” Hopkins said recently on her first day back at Strongman training since giving birth.

Hopkins, 34, quit her job to care full-time for her daughter, Louie, but does not want to give up Strongman competitions and preparing for them at Punch Kettlebell Gym in Norwalk, Connecticut.

“You feel proud of yourself, which is awesome,” said Hopkins as she gazed at Louie snoozing in her portable cradle.

“For a lot of women who do Strongman, it’s part of who we are,” said Gina Melnik of Boston. “It’s how you define yourself.”

The 38-year-old government researcher with a PhD from Tufts University has pulled a monster truck and repeatedly flipped a 650-pound tractor tire.

Melnik and other women succeeded in changing Strongman rules in February so that new mothers can quickly return to the sport. The new “StrongMom” regulation allows competitors who have advanced to a higher class to drop back to the novice level for up to two years after giving birth.

“Motherhood can swallow you whole if you let it,” said Melnik, who is due to give birth to her second daughter in June. “Being able to compete again is really, really important to our happiness and to feeling like a whole, complete person again.”

The rule change was crucial since promoters intentionally make competitions so hard that only a few athletes succeed, Melnik said. Once someone advances beyond the novice division, typically after winning an event, future challenges are staggeringly difficult.

“What makes our sport cool is also what makes it incredibly hard to get back to after giving birth,” Melnik said. “A lot of the veteran women, they just disappear around the time they start having families.”

It takes up to two years after giving birth for a woman’s body to return to pre-pregnancy strength, said Stefanie Tropea, 37, owner of the Norwalk gym and winner of the 2013 America’s Strongest Woman contest, lightweight division.

Helping new mothers stay in the game may, in turn, support those facing one of the most formidable challenges of motherhood: post-partum depression.

Women who regularly exercise and continue to do so after giving birth have a more positive body image, said Danielle Symons Downs, professor of kinesiology and obstetrics and gynecology at Pennsylvania State University. “(That) may reduce depressive symptoms in pregnancy and postpartum.”

Hopkins said Strongman pumped up her self-esteem and sense of empowerment. She is relieved to know the new rule will enable her to compete in the annual “Battle of the Belles” in October in Norwalk, where in the past she pushed a Jeep Wrangler 100 feet (30 meters).

“It shows them that Mom can be a hero, too.”