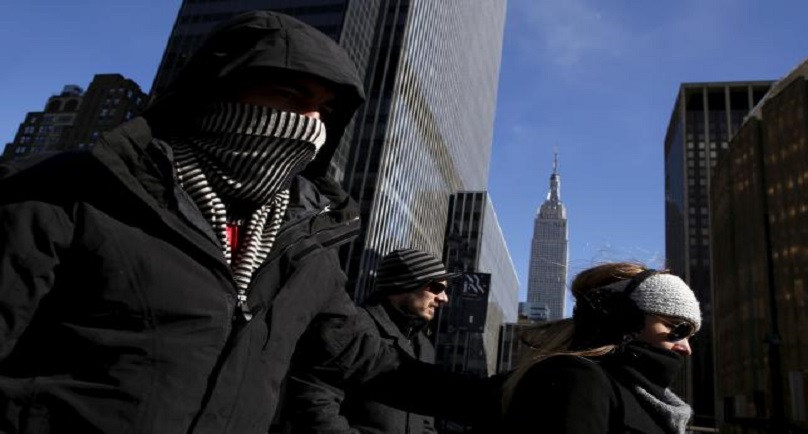 BOSTON (Reuters) – Residents of much of the northeastern United States woke up on Sunday to bone-chilling cold conditions that shattered Valentine’s Day records in Boston, Hartford and Providence.

Officials warned residents to stay indoors in the face of the -9 degree Fahrenheit (-22.8 Celsius) temperatures, which felt as cold as -40 degrees Fahrenheit with the wind chill.

“It’s fair to say that this is a historic Arctic outbreak for the modern era,” the National Weather Service said in a morning forecast update.

Forecasters warned that frostbite could set in on exposed skin within minutes, and urged residents to check on elderly neighbors. While the system brought intense cold to the region, little snow has fallen so far this winter, placing less stress on roads and rails than last winter’s record-setting 9 feet (2.75 meters) of snowfall in Boston.

New York was also feeling the coldest weather it had experienced in a year, and Governor Andrew Cuomo urged people to stay inside.

“With bitterly cold temperatures expected to continue through the long weekend, New Yorkers should remain alert and avoid all unnecessary travel,” Cuomo said.

The cold put a damper on some couples’ Valentine’s Day celebration plans, with walks and other outdoor activities curtailed.

In Cambridge, Massachusetts, Kristen Carlson, 25, and her boyfriend Ross Crory, also 25, were adapting their plans.

Others embraced the extremes, with more than 2,000 taking part in the Sea Isle, New Jersey, annual “Polar Bear Plunge,” dipping into the icy Atlantic to raise funds for the city’s revitalization.

Police throughout the region sought homeless people to urge them to spend the night in shelters, where cots, mats and even chairs were rolled out to give people a place to shelter from the cold.

But Kevin Taylor, a 49-year-old native of Massachusetts living on the street in Harvard Square, outside Boston, said he had coped with the cold on his own.

“I got a sleeping bag sized tent that protects me from wind and snow. I got a zero degree sleeping bag and fleece blankets,” Taylor said. “I was born and raised in New England. I’m used to this. It’ll start breaking tomorrow.”

Forecasters said temperatures around Boston would rise to about 29 degrees Fahrenheit (-1.7 Celsius) on Monday.

For Thais overcome by the king’s death, medics and a hotline