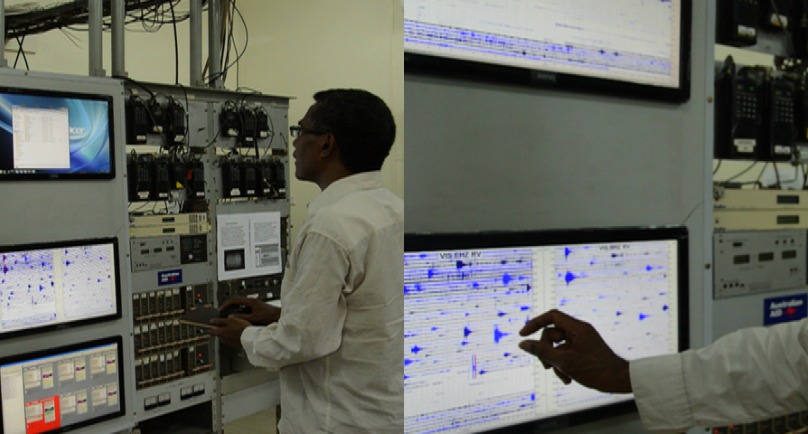 At the Rabaul Volcano Observatory, a set of computers attached onto a corrugated iron wall is monitoring earthquakes in real time.

Senior volcanologist, Ima Itikarai, is doing a routine check on the number of earthquakes that happened in the last 30 minutes in the New Guinea Islands region.

He pointed to a series of audible sound waves showing on the screen as he explains, “This waveform shows earthquakes of more than 5 magnitudes or more…some are even smaller that we can’t feel…but our instruments in the field can pick them easily…they are sensitive”, Mr. Itikarai said.

The information gathered at the Rabaul Volcanological Observatory also comes from other small volcano centers, located as far as Manam in Madang and Esa’Ala in Milne Bay provinces.

The significant part of this operation is the issuing of timely emergency information to the public, in an event of an earthquake, tsunami or volcano eruption.

“In terms of emergency evacuation, it is the responsibility of the provincial disaster committee. What Rabaul volcano observatory does is providing information on possible intending eruption”, Itikarai said.

The Rabaul Volcano Observatory in East New Britain province over the last three decades has had a significant impact on the province.
Much of the volcano related information is relayed from the volcano centre.

Even after the 1994 eruption that devastated the town of Rabaul, many people haven’t left the affected areas. The people still consider the Rabaul facility as primary source of information in an event of disaster.

“We are predicting an eruption between June and July…it probably going to be a small one. It might probably last a few hours and stops. We have issued warnings already to the people to be ready for it,” Mr. Itikarai said.

The new set of seismic instruments recently set up at the observatory assists volcanologist to determine what’s going to happen and when and the results are more accurate and reliable.

What has stood out from this operation is how information is relayed to the four thousand plus people of Rabaul town, and many more from the nearby villages who are kept informed of any possible disaster.

As Papua New Guinea focuses its efforts of disaster mitigation, this small centre will continue to play a key role.

Supporters call for election petition to be withdrawn