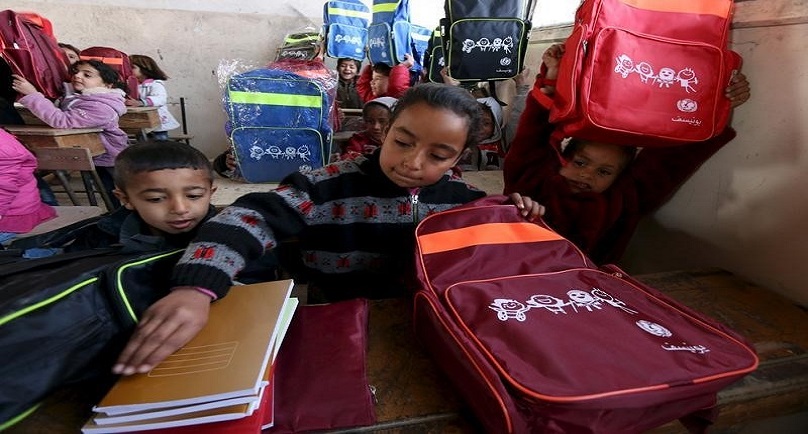 Image: Syrian children carry bags, printed with a UNICEF logo, that they received as aid inside their classroom in Ras al-Ain city, Syria February 1, 2016. REUTERS/Rodi Said

LONDON (Thomson Reuters Foundation) – A quarter of the world’s school-age children – 462 million – live in countries affected by crisis such as wars and disasters, UNICEF said on Wednesday as it unveiled details of a major new fund to help get children back in class during emergencies.

Although nearly 75 million children are considered in desperate need of education or help to stay in school, the U.N. children’s agency said only 2 percent of global humanitarian appeals are on average dedicated to education.

The News Cannot Wait fund, which will be launched at the first World Humanitarian Summit in Istanbul this month, aims to raise nearly $4 billion to reach 13.6 million children within five years and 75 million by 2030.

“Going to school keeps children safe from abuses like trafficking and recruitment into armed groups and is a vital investment in children’s futures and in the future of their communities.”

School also helps guard against child labour and child marriage, yet the role of education in protecting children is often overlooked during crises, UNICEF said.

“It is time education is prioritised by the international community as an essential part of basic humanitarian response, alongside water, food and shelter,” Bourne added.

In Syria more than 6,000 schools are out of use, having been attacked, occupied by the military or turned into an emergency shelter. In Central African Republic a quarter of schools are not functioning.

In periods of crisis, parents cite education as one of their top priorities, yet last year only a fraction of children identified as needing education in humanitarian response plans were reached, UNICEF said.

The new fund would disburse aid at the first sign of upheaval and provide longer term funding in protracted crises, UNICEF said in a report.

When crises hit, children are often forced to move repeatedly, interrupting their schooling.

In the poorest communities, UNICEF said a child who is out of school for more than a year is unlikely to return. Girls are 2.5 times more likely to drop out of school than boys.

“News can be a driver of stability, reconciliation and peacebuilding, and a buffer against future social and economic shocks,” the report said.

“If education is not used as a lever to break the cycle, then crises will continue to be repeated.”

UNICEF could not say if the number of children in crisis affected countries had increased as there were no comparable estimates for previous years.

The fund will seek support from new donor countries, the commercial sector, foundations, philanthropists, diasporas and faith-based groups, as well as traditional donors.

It will be launched by UNICEF with partners including the U.N. education envoy, the U.N. refugee agency and governments.