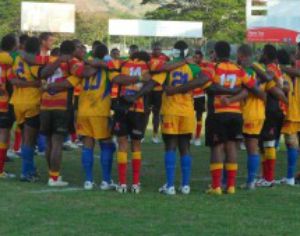 With two wins already under their belt, and one more preliminary match remaining, the PNG Pukpuks are well on their way to a finals appearance at the 2015 Oceania Cup.

Their final pool game will be played this Sunday, where they will face off against the Soloman Islands.

Despite very little support in the stands over the past two days of competition, the Pukpuks have done incredibly well in their journey towards reclaiming the Oceania Cup.

Their game yesterday against American Samoa showed the versatility they have across their backline, with players like Liebert Suang filling in suitably at fullback.

Without the brilliance of Wesley Vali on the wing; Jacky Marcus, Jonah Kautu, Tissa Kautu and Richard Aitsi formed a winning combination was once again.

The scrums were well controlled, with tight head prop Wesley Thomas, this time in the starting 15, and Rabbie Namaliu Jnr instrumental in the rucks and mauls.

Having played two of their toughest opponents already, and coming out with wins, the game against the Solomon Islands will give them a chance to run through their paces against a side which is yet to record their first victory for the tournament.

“Come Friday we will start doing what we have to do. They’re probably a little bit bigger than us, so we will have to front up with the physicality from the Solomon Islands,” said Pukpuks Vice Captain, Nigel Genia.

Meanwhile, Solomon Islands captain Fredson Soaki confirmed it was back to the drawing board for his team ahead of Sunday’s clash.

“We’ll go back to the drawing board and work on the basics again,” he said.

Power Outage; A Result of Several Faults on Transmission Lines