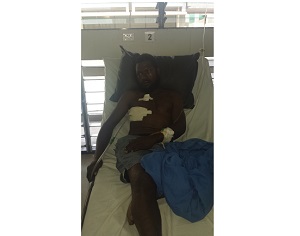 A man received bullet wounds to the right side of his chest and was admitted at the Port Moresby General Hospital, after police opened fire at betelnut vendors at the Koki-Wanigela market.

Boala Beru, 23, of Abau and Wanigela parentage, is in a critical condition and will undergo surgery tomorrow.

Another man, Corey Maki, a 42-year-old employee of PNG Gardener, a company owned by Moresby South MP and Sport and Tourism Minister, Justin Tkatchenko, was struck in the forehead by a can of teargas.

He received 10 stitches to his forehead and was later discharged from the Kaugere Health Centre.

At around 11am yesterday, members of the police mobile squad (MS) arrived at the scene to arrest betelnut smugglers who use the route to take betelnut into the city. They arrived after the smugglers had left.

The MS unit then fired teargas and live bullets to disperse the vendors.

The teargas landed on Corey’s forehead and he fell unconscious. Boala received a bullet to his right chest.

The spent cartridges of the live ammunition used were produced as evidence. Internal Affairs Unit (IIU) officers said identities of all the MS officers involved are known.

This is the second accident in a space of 12 months in this village that has seen locals receiving bullet wounds and being admitted to the hospital.