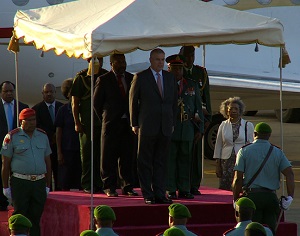 His Royal Highness, Prince Andrew, the Duke of York, has arrived in Papua New Guinea.

The Duke of York has several events on his program, before officially opening the 2015 Port Moresby Pacific Games on Saturday evening.

His royal highness was flown into the country on the government falcon jet this afternoon where he was met with the 21 gun salute by the Papua New Guinea Defence Force.

The Duke of York then inspected the  Guard of Honour, before he was escorted out of the aiport by PNGDF Commander Brigadier General Gilbert Toropo.

The Duke of York has several events on his program before officially opening the 2015 Port Moresby Pacific Games come Saturday.

This is the second time the prince will be officiating when Papua New Guinea plays host to one of the biggest sporting events in the Pacific.