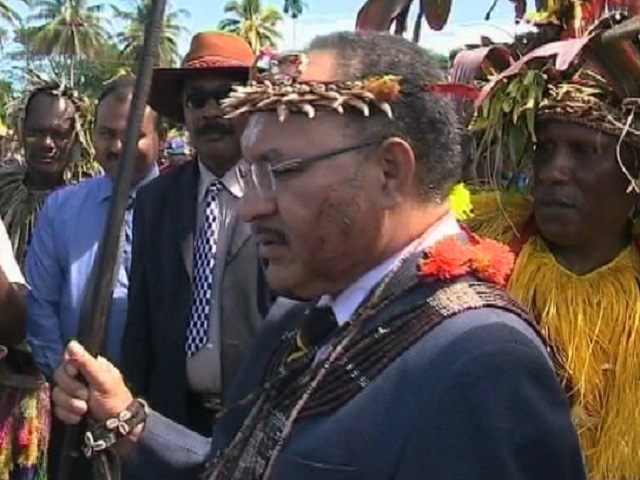 After nearly 38 years of denial of government’services, Talasea in West New Beitain is to get a new ring road aroundthe Talasea Peninsula to be built at a cost of Ten Million Kina.

There is also an undertaking for a new high school,the first for the District.

Talasea has its history in West New Beitain. It lies tothe north ofthe province on a stretch that dangles like an umbilical cord to Cape Campbell tothe Besmarck Sea.

Talasea has nearly thirty thousand people,the rich volcanic soil cushionsthem well and that’s about all,there is nothing else – no industries, no infrastructures,the district even doesn’t have a high school.

There is no ring road linkingthe Talasea Peninsula linking Belumul and Beludava. The only remnant ofthe development is a sealed road from Kimbe to Talasea. The lack of all in just about allthe fronts has given rise to Law and Order problems.

That’s been Talasea inthe last thirty seven years butthe people quiet in nature have been patient; that’s been rewarded. They will now get a ring roadthe ground work for the new high school is in progress.

As any chief would do,the new Chief of Chiefs of Bekovi obliged. He hadthe people captivated. He toldthem he and his government hadthe people at heart. Its pillar policies of education, Law & Order, Health Services,Infrastructure and anti-corruption reflect that.

Mr O’Neill saidthe Province had established models inthe two industries which could be replicated by ther Provincials will similar potential.

He saidthe successful management and production formulas of New Beitain Oil Palm must be passed on to Copra, Cocoa and Coffee.

The Prime Minister toldthe people of Talasea thatthe Government is serious about renewable resources and has increased allocations each year tothe Agriculture Bank for people to access.