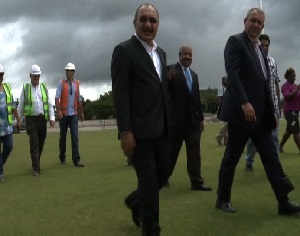 Papua New Guinea Prime Minister, Peter O&rsquO’Neill once and for all settled the concerns and speculations surrounding the completion on the construction of venues, assuring the handover of venues, will go as planned, for the 31st of May.

O&rsquO’Neill was accompanied by Sports Minister, Justin Tkatchenko, and delegates of the ministry of sports, on a tour of the Pacific Games venues in Port Moresby today.

Given the time frame that the contractors have had to work with, O&rsquO’Neill said, the results speak for themselves.

“We are approaching March, in three months, it will be ready; Papua New Guinea will deliver.”

O&rsquO’Neill urged PNG to work together, and steer away from the negativity on the construction of venues.

“Don’t listen to all the rubbish; I’m fed up with Papua New Guinean’s telling me we can’t do it. We can do it.”

Fletcher Morobe’s project manager, Geoff Hall told the media delegates who accompanied the Prime Minister on his tour of the venues, “the company has been working seven days a week, for the past 20 months,

and we aren’t doing it to fail.”

Yesterday, at Oil Search’s announcement on the sponsorship of the Games Relay, Chief Executive Officer of the Games Organising Committee, Peter Stewart, shared similar views as the prime minister, stating, that, all that had to be seen to disprove doubts, was to look at what is already being delivered at present.

Pacific regionalism in crisis: Forum and USP both weakened in a single day