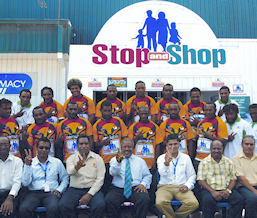 Competition leaders SNS Port Moresby Vipers play host to the reigning premiers from Apo land, the mighty Bitangor Goroka Lahanis this Sunday at the Lloyd Robinson Oval in the Nation’s Capital. The Lahanis are struggling to regain their dominance that made them Champions in the past years while Vipers who finished last season in fifth spot are at the top of the ladder with 10 points compared to the Lahanis who sit seventh on the ladder with 6 points.

Vipers recruitment drive in the off season is starting to bear fruit with former Hela Wigmen backliners Stargoth Amean, Richard Kambo and Larsen Marabe, as well as former Lahanis prop forward Tony Dai along with former Gurias halfback Israel Eliab now playing the role of utility back, all  hitting their straps for their new club. The Lahanis side went through an overhaul last season with their aim of sticking to their young guns for the future which may have caused them to lose some experience in the older heads that were released.

Other matches around the country will see the Enga Mioks take on the Gulf Isapea in Wabag while over in Lae the SBSL Mendi Muruks return from their bye to host the high flying second placed WGS Mt Hagen Eagles. The Snax Lae Tigers will be doing some soul searching after racking up their 5th consecutive loss as they have their bye this weekend.

Capital Rugby Union into Round 7