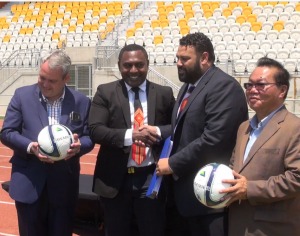 Papua New Guinea has finally been given the green light to host the FIFA Under 20 Women’s World Cup.

After months of discussion, the approval was given by FIFA overnight.

This is the next major tournament to be held in the country, following the Pacific Games.

This official announcement was made today by OFC President, David Chung, and Minister for Sports, Justin Tkatchenko, at the Sir John Guise Stadium.

The original plan for the FIFA tournament was to have matches held across various parts of the country, however due to the condition ofplaying fields in Kokopo and Lae, the U-20 Women’s World Cup will now be staged only in Port Moresby.

A total of 16 countries from around the world will be coming to the country.

Minister Tkatchenko said the event will once again place Papua New Guinea on the world stage.

A document was presented to CEO of the PNG Sports Foundation, Peter Tsiamalil Jnr, which highlighted plans for the four venues and a detailed summary on how to bring them up to FIFA’s minimum requirements.

PNG’s capital city has gone through major changes over the years. And after hosting the 15th Pacific Games, the city is certainly excited to be announced as the host city for this upcoming event.