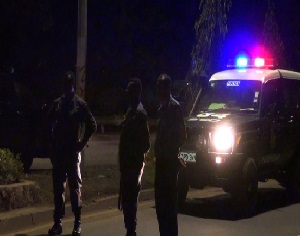 The New Year period in Port Moresby was peaceful with no major crimes reported.

Police has beefed up its man power to over 400 sector personnel patrolling and conducting major road blocks along sections of the road in the city.

The security was beefed up with the addition of a mobile unit, and police personnel conducting a number of roadblocks and patrols.

The road blocks started at 8pmpm, throughout the night into the New Year.

A media team together with a police escort patrolled the city conducted thorough checks on vehicles to validate their registration and driver’s licenses.

The new year patrols took cue from a swift start proceeded with police escorts and members of the media unit tailing the main police vehicle.

Everywhere in the city, sounds of siren wailing with neon lights and vehicle horns beeping as policemen are at work confiscating liquor and arresting perpetrators.

As the media envoy completed the last patrols at Gerehu, they then proceeded to Lamana Hotel to witness the fireworks display to welcome the New Year.

POM Dart Competition into round-3