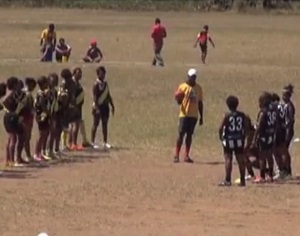 This season sees four women’s team compete, and has the hopes of having an increase in the number of women playing AFL in the coming years.

Today’s matches saw two women’s matches between Gordons Kokofa and the Lamana Dockers. Then the CPL magpies took on the University Tigers.

The Kokofa women proved too strong in their contest against the Dockers. Taking an early lead, and continuing their lead all throughout the contest.

Kokofa went on to win the match, outclassing their opposition 36 – 9.

In the second Women’s match, the CPL Magpies took on the mighty University Tigers.

The magpies started the match very strongly, keeping the tigers scoreless in the first and second quarter.

The Tigers managed one goal in the 3rd quarter while the Magpies continued to dominate winning the match 26 – 7.

In the Men’s A grade, the central bombers played off against the CPL Magpies.

In an entertaining contest, it was an evenly match game which went down to the wire.

The central bombers held on the win the match narrowly 17 points to 21.

The competition will head into the finals in the next four weeks with the Koboni’s on top of the ladder.

ENB Police Clamp Down on Gangs