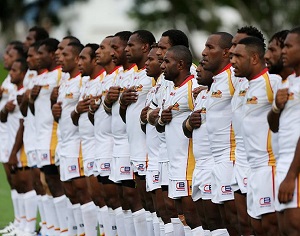 The PNG Hunters have been training at the new look Sir Guise Stadium, renovated for the Pacific Games last year, and are set to make the ground their official home, for now.

After playing their final home matches of the 2015 season in Port Moresby, the PNG Hunters will continue to host matches in the nation’s capital.

Sir John Guise Stadium will be the Hunters home for the time being while the National Football Stadium is in its final stages of construction.

The National Football Stadium will be the home for rugby league in Papua New Guinea once completed, built to National Rugby League standards.

While the Hunters are focused on the upcoming season, Coach, Michael Marum, said the team will need to get used to the playing conditions in Port Moresby.

Meanwhile, various sporting venues throughout the nation’s capital, such as the Bisini Sport Ground, are now to be upgraded to meet FIFA requirements ahead of the FIFA Under 20 Women’s World Cup later in 2016.

PM :With the historic meeting on budget implementation

ANZA help save lives in PNG