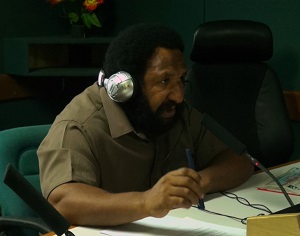 Opposition Leader and Member for Kandep, Don Polye, says the O’Neill-Dion Government should not be eyeing privatisation as the solution to economic growth.

Polye says the government has failed terribly in saving valuable assets of the country with its policies.

He made these comments while being on air at the FM100 Talkback show today.

The Opposition leader was vocal with issues hitting the country.

Mr Polye shared open dialogues with callers from around the country, expressing concerns on the purchase of turbine engines and the call by the government to privatise PNG Power Limited.

Polye said the national government is not doing enough, leaving PNG Power to crumble to its knees.

He criticised the government for making poor decisions. The Opposition leader says affairs of the country must not be jeopardised, leaving Papua New Guinean’s to suffer in receiving little or no basic services.

Meanwhile, Mr Polye said the Tax Credit Scheme is not used properly by the government. He wants it to be halted.

The Opposition leader says, the Opposition will continue its fight and challenge the government in addressing issues affecting the people of this country.