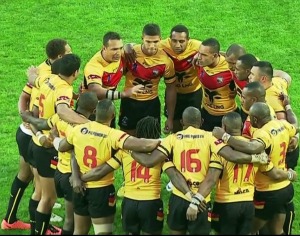 The media has been abuzz with comments made by Opposition Leader, Don Polye, criticising the government’s immense expenses towards the code of rugby league.

The PNG Kumuls have dropped to 14th place on the Rugby League World Ranking, following the World Cup in 2013, and the SP Hunters have yet to win an Intrust Super Cup title.

Although Tkatchenko has come out supporting rugby league in a media statement recently released, saying the O’Neill-Dion Government has, and will continue to invest in rebuilding rugby league infrastructures and the junior leagues in the country, the general public has argued why the government has not lent an equal amount of support to sporting codes that have excelled ahead of rugby league.

On EMTV Sport’ Online Facebook Poll conducted throughout the months of October and November last year, many stressed their disappointment with the recent results of both the Kumuls and the Hunters.

Don Polye’s comments run in alignment with these results.

It was reported in one of the dailies that Polye said PNG’s ranking is an embarrassment, because a significant slice of taxpayer’s money for sports has been taken by rugby league without any improvement.

However, Tkatchenko said in his recent release “the Government is increasing investment in other sports including soccer, cricket, athletics, swimming and AFL.”

Landowner Calls for Fair Representation in Manam Restoration Authority Board