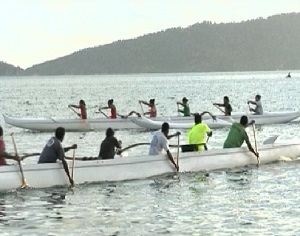 The national men’s Va’a team arrived in the country today after a successful run in the IOCRA National Titles, taking Gold in numerous events.

Sports competition manager for Va’a PNG, Melissa Kibuna, said the team performed extremely well securing Gold in the V12 event, and Bronze in the 500m sprints. The women placed second in their 1500m race and third in the V12 event.

Kibuna also commended her team of official’s whom officiated during the IOCRA National Titles saying they worked well  together with the officials of the event; and contributed to the titles being a success.

With the women’s team arriving from the Gold Coast tomorrow, the team’s performance at the IOCRA National Title have given the team a much needed boost and shown that they can be a threat to the other Pacific Island nations come the games in July.

Their focus now is on maintaining their form and working on capitalising on any weaknesses they may have.