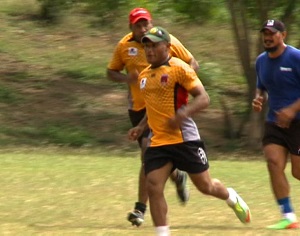 While the hype of the Pacific Games has died down, the Pukpuks are in full swing in their preparations for the FORU Cup.

With the aim of securing a fourth title this year, the team boosts a vast number of players both on and off-shore.

Come game time, the team will be counting on much needed experience in the likes of Tisa and Junior Kautu, who have both played in numerous international and regional tournamen’s in the past. Along with scrum-half Liebert Suang, Adek Naio and Nigel Genia.

With Capital Rugby Union season proper yet to commence there now lies a tough task of equipping the Port Moresby-based players with much needed match fitness.

In the coming weeks, players from outside centers, Madang, Lae, Goroka and Rabaul, including the Brisbane-based players will be called into camp for their final build-up towards September.

The Pukpuks head into the tournament as three time champions and will eye down for a fourth after Cook Islands snatched the prize in 2013.

Isapeas and Tigers Fined for Brawl