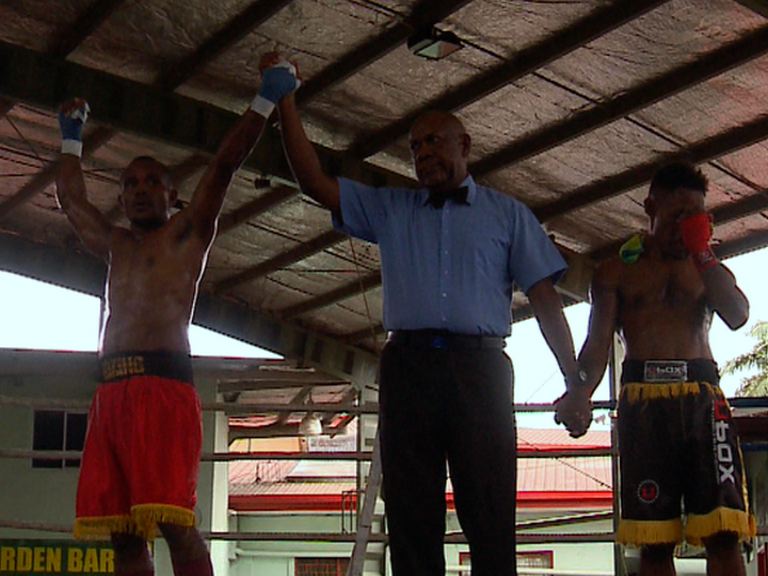 It was a real battle in the ring when it came to the professional bouts straight after four amateur performances to entertain the crowd.

The first bout of the pro-event was between Allan Peter and Jimmy Paius in the 52kg, who started off to a slow hit while figuring out each other’s weaknesses in round one.

In the second round, things got even tougher for the two corners as they battled through to the next round.

Slowly managing to catch their breath, Allan in the red corner taking advantage in the first two rounds, led with punches, this time, it was a terrible turn off event, as Jimmy Paius knocked his way through with heavy punches, winning the third round, after the judge’s decision.

The second bout of the pro boxing event was taken out by John Korake, who is the current PNG champion.

The third bout was a heated encounter between Jason Aiu in the blue corner, representing Manus and Johnson Kapus.

The pair showed great defense techniques and had a fair share of punches to count on to win the bout.

At third round, Aiu of Manus had every right to smile about after knocking down his opponent, Johnson Kapus who fell short of breath in the third round.

The last and the main bout, in the light weight division, John Oska from Central Province take on Junior Kaupa of the red corner.

The two pro fighters shared equal amount of punches in the first two rounds but got even tougher in the third.

Running short on breath was John Oska who tried his best to gain momentum was a little dazed, struggling to fight back.

Still on his feet, all buffed and energised, opponent Junior Kaupa of the red corner with his fast punches and absolute determination to win the bout crippled his opponent to the floor. He ended the bout at round three after the judge’s count.

The next affair of the pro-boxing event will be at the end of next month.