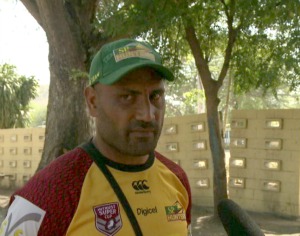 It’s only day one of the pre-season camp but according to Coach Michael Marum, the PNG Hunters have settled in well.

With 33 boys already in camp, three more are expected to arrive by the end of the week, including former captain Israel Eliab.

Eliab will be assisting coach Marum over the four weeks, prepping the boys for the season ahead before his departure to the UK.

The 19 youngsters, who have been selected out of both the Intercity Cup and U19 schoolboy’s competition, are looking forward to the opportunity to train, play and learn under the guidance of Marum, and senior players along the likes of Wartovo Puara and Noel Zemming.

While the exit of four renowned Hunters reps is said to have a repercussion on the team next season, Marum has instilled faith and confidence in these young blokes, and has promised some surprising performances.