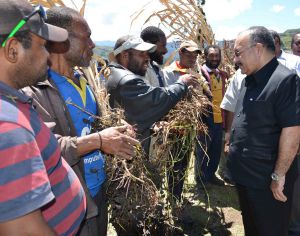 Areas in the Highlands region affected by drought and frost were visited this week by PNG Prime Minister, Peter O’Neill, who will bring this issue to Cabinet today.

The Prime Minister visited Tambul and Mendi where food supplies have been received, and Ialibu-Pangia where truckloads of supplies are currently bringing much needed supplies to communities.

These severely affected areas have received K5 million in funding for relief assistance, following news of food crops rigorously destroyed by frost and a shortage of water in the recent weeks, due to the El Nino drought and effects of climate change.

The visit follows the Prime Minister’s direction last week for the Department of Prime Minister and National Executive Council to provide K5 million in funding for the provision of relief assistance to the severely affected areas.

PM O’Neill first visited the district of Tambul in the Western Highlands Province, which was the most affected, and one of the first districts to be badly hit by frost.

He also visited Ialibu-Pangia to assess the damages and assure the people that relief supplies were on its way.

The Mendi-Munhiu electorate also received a visit, where supplies have been received and are being distributed.

The Prime Minister’s Department and other agencies have been tasked to assess the affected areas as conditions continue to worsen.

Also in concurrence, the National Agricultural Research Institute is playing its part, by visiting affected areas and providing free crop seedlings for replanting in hopes to sustain the people.

These measures are being pursued in an attempt to ease an impending worsening of conditions, anticipated in the coming months.

The Prime Minister says through quick response, it is reassuring to see the communities are receiving relief supplies.

However he adds, that in order to ensure the broader co-ordination and effective delivery during the critical period, food and other supplies will be transported directly to destinations instead of distributing cash

Calls Made To Crack Down On Street Vendors In Lae