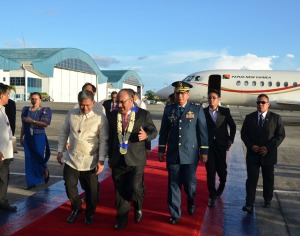 Leaders and Ministers from the 21 Asia Pacific Economic Cooperation (APEC) member economies are convening in Manila, Philippines for the 2015 APEC Economic Leaders Week.

The week will end with the APEC Economic Leaders’ Meeting, which is seen as being critical in advancing the policy agenda that will be chaired by Papua New Guinea in three years time.

Prime Minister, Peter O’Neill, left for the Philippines yesterday to attend the meeting.

The government’s Kumul executive aircraft touched down in the Philippines capital of Manila yesterday.

O’Neill was welcomed by officials from both PNG and the Philippines.

During the APEC Leaders week, the Prime Minister is expected to hold bilateral meetings with his counterparts from other countries to discuss matters of mutual concern.

Under the theme, Building Inclusive Economies, Building a Better World, participants from the 21 APEC member economies will take new joint actions to boost trade and growth in the Pacific Rim, while ensuring that the benefits are widely felt.

The 2015 APEC Economic Leaders’ Week is hosted by the Philippines and chaired by President Benigno S. Aquino III.