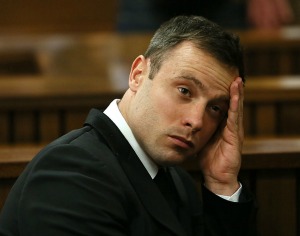 Convicted Olympic blade runner, Oscar Pistorius, was released on parole this week just short of a year into his five-year sentence for killing his girlfriend Reeva Steenkamp.

He will serve the rest of his sentence under house arrest.

Pistorius will still face an appeal by prosecutors who argue he should have been convicted of murder, rather than culpable homicide.

“The Kgosi Mampuru, the second Correctional Centre local management has informed us that they placed Oscar Pistorius under correctional supervision. They took him out of the facility to his uncle’s house last night after half past seven,” said Correctional Services Spokesman Manelisi Wolela.

Currently, he is staying at his uncle’s house under conditions of the court ordered house arrest.

Pistorius was found guilty of culpable homicide when he fired four shots through a locked bathroom door and struck Steenkamp, on Valentine’s Day 2013.

From the genesis of his trial, Pistorius has vigorously maintained he mistook her for an intruder.

The condition of his house arrest has Pistorius confined to his uncle’s home in a wealthy suburb of Pretoria.

A spokeswoman representing Pistorius’ family stressed that his sentence has not been reduced or shortened.

“It is very important for the family to emphasise that Oscar’s sentence hasn’t been shortened or reduced. He is simply entering the next phase of his sentence now. He will serve this under the strict conditions that govern correctional supervision,” said family spokesperson, Annaliese Burgeff.

Culpable homicide, the offence that Pistorius was found guilty of, bears a lesser sentence compared to the sentence of murder.

Culpable homicide is an entity of certain offences in various jurisdictions of the Commonwealth, which involves the killing of a person either with or without an intention to kill.

And that depends entirely on how a particular jurisdiction has defined the offence.

Prosecutors argue the verdict should be one of murder because Pistorius must have known that the person behind the door could be killed.

The appeal is due to be heard on November 3.

A murder conviction would result in a minimum sentence of 15 years in prison.

Daru Gets Millions Of Kina Worth Of Water Projects