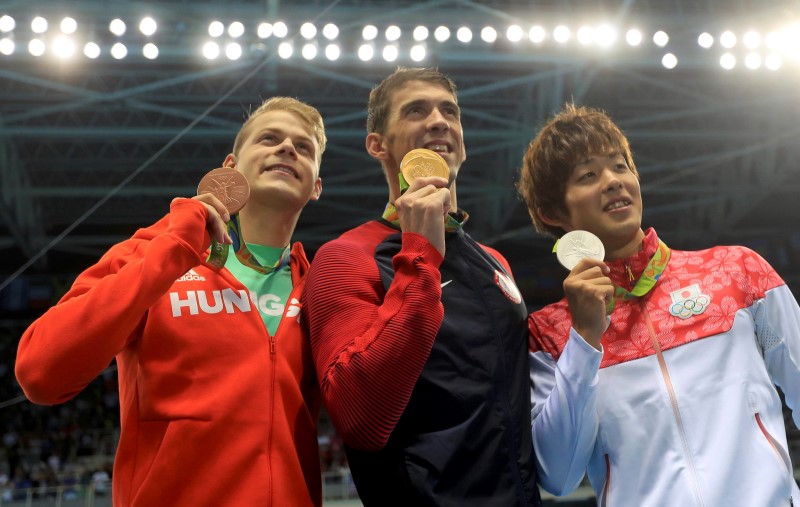 Phelps, who would have had four successive wins in the event but for that London race, has now amassed a record-extending 24 Olympic medals with the chance of another later on Tuesday in the 4×200 freestyle relay.

With all eyes on the rematch in Rio, with Phelps in lane five and Le Clos next to him, Japan’s Masato Sakai and Hungary’s Tamas Kenderesi crashed the party to collect silver and bronze.

Defending champion Le Clos, whose run-up to the Games was overshadowed by the devastating news that both of his parents had been diagnosed with cancer, finished an agonising fourth.

With all eyes on the two big men on the blocks, both avoided eye contact as they waited to step up with the pair standing almost back to back.

The tense atmosphere was cut by shouts from the crowd just as the swimmers were trying to compose themselves, with the start aborted before they had taken racing positions and spectators urged to stay silent.

Le Clos, who won a 200m freestyle silver on Monday, reacted fastest than Phelps at the start but it was Hungary’s Laszlo Cseh who led at the turn with Phelps second and Le Clos third.

The American then used his mighty ‘wingspan’ to forge ahead into clear water.

Cseh began to fade, with Le Clos moving into second at the 150 metre-mark but the South African could not match Phelps in the final lap, with the American punching the air in delight after stepping out.