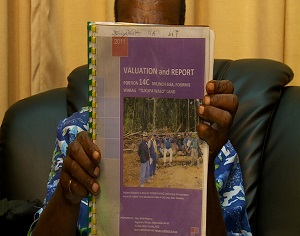 PDL seven landowners in the PNG LNG Project have spoken out on delayed payments for environmental damages caused to their land.

The landowners say after submitting a claim of K3.6 million almost four years ago, they are still waiting for developer Exxon Mobil to take steps to address this issue.

The Tugupa Walo Land Group says the environmental damages to Portion 14C were kept in the dark awaiting Exxon Mobil’s response to pay their claim.

An independent value compiled a report on damages done on Portion 14C and copies of reports have been submitted to Exxon Mobil, Petroleum and Energy Department and other stakeholders.

A clan spokesperson says people in the village are still living in suspense over the payment.

Exxon Mobil PNG says the Courts have twice in 2011 and 2012 found this claim to not be sustainable under the law of PNG.

In an email received by EMTV news, Exxon Mobil stated that compensation for land deprivation is paid according to set rates and not assessed by consultant valuers, as Tugupa Walo suggests.

Exxon Mobil says it has met its statutory obligations under the Oil and Gas Act in respect of compensation for deprivation for land required for the Project.

Exxon says the money currently sits in a trust account until these matters are resolved.