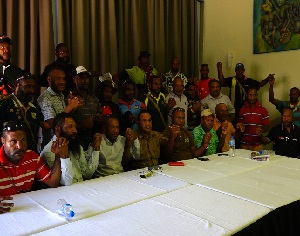 Landowners from the PDL 7 area in Hela province want the government to state clearly where the LNG benefits are parked.

Spokesperson, Andy Hamaga, said people want the government to do the right thing and be realistic with the benefits and agreements signed in Kokopo.

Recently, they handed over two petitions to the national government, but say the response is not satisfactory.

They say the two petitions will be the last, and several strategies will be taken to define the life of the PNG LNG project.

They have brushed aside differences and are working tighter to make sure benefits signed in the Umbrella Benefits Sharing Agreement (UBSA) and license-based benefits sharing agreements (LBBSA) are honoured by the government and stakeholders.