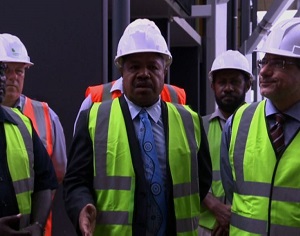 After visiting the Pacific Games venues yesterday, NCD Governor Powes Parkop says the National Capital District is banking on the Games to improve the status of Port Moresby, as the capital city of Papua New Guinea.

As of the 4th of July, Port Moresby will house 4000 athletes, and 300 international media personnel for the 2015 Pacific Games.

While the Games will promote business, trade, and investment, one of Parkop’s primary objectives is to elevate the city’s portfolio for the tourism industry.

Parkop told the media at the Games venues tour yesterday with Prime Minister Peter O&rsquO’Neill, “My goal is to make Port Moresby a destination for the future.”

From the security of our international guests, to the catering and transportation operations, Port Moresby will be accountable.

The nation’s capital will play a vital role in ensuring the host venues offer the best hospitality services available.

Parkop gave assurance that all stakeholders involved were doing everything possible to ensure the successful delivery of the Games.

“Minister Tkatchenko and Prime Minister O&rsquO’Neill have done their part on behalf of the National Government, and the PNG Olympic Committee is preparing our athletes, so everybody is doing their part to make the Games a success.”

Prime Minister Peter O&rsquO’Neill said that while the focus now is on the Games, these facilities will be used to host important events in the near future.

“We are going to educate our future leaders in these facilities. It’s not something that will be put to waste, like the past Games, where the facilities were built and neglected.”